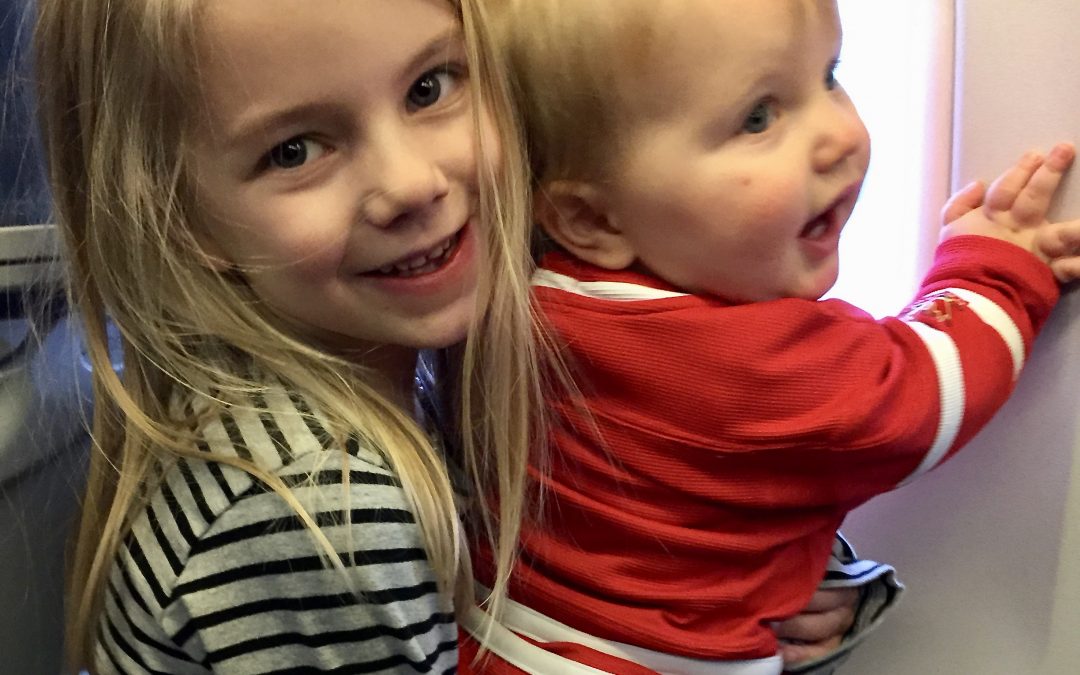 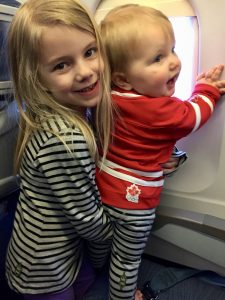 You know what I love about flying? People cater to me. I’m a mother of two, and I’m used to tiny humans demanding things of me all day long.  Then I get on a plane and I have people who regularly come by to check if I need anything. Of course I love flying.

One of the side-effects of spending eleven years living 3,000 miles from where you were raised is that you become a seasoned traveler.  Add two young children to the mix and you acquire a skill set on par with four-year degree, some of which I learned the hard way.  Let me save you the learning curve.

Remember that scene from Mary Poppins where she takes about one million items out of her bag?  That is your carry on.  In fact, you should have two carry on bags.  If your child is over two, you each get a bag – and if your child is under two, you have a suitcase and a diaper bag.  Either way, you’ve got two bags, and here’s how you divide them: the first bag contains all the things that you anticipate needing on the flight: snacks, diaper change for babies, iPads and headphones.  Apologies if you were expecting better parenting – screen time is limited at home and almost limitless in the air.  The only caveat is that I usually make Amelia hold out until I can get Ewan to nap.  In any case, I’ve seen the airplane screens fail plenty of times and unless you’re prepared to be a court jester for hours, you better be packing a screen and downloading the heck out of Netflix the day before you fly.  On the topic of snacks, I suggest packing some nut-free energy balls and a generous supply of goldfish.  Produce gets soggy quickly; I usually stick to carrots and apples. Pack small, empty water bottles for the kids.  The airline attendant will fill it for you, and you avoid the risk associated with giving your kid a loose cup of water on a tray that moves when they hit it.

The second bag contains items you might need but hope you don’t.  First, a change of clothes for everyone traveling (not just the kids); second, swimsuits. You obviously don’t need swimsuits on the plane but if your luggage got lost, you wouldn’t have one for the hotel pool. Maybe it’s just me, but the last thing I want to do on vacation is go through the traumatizing experience of purchasing a swimsuit. I keep travel-sized cream and makeup in the carry-on, and my camera is in the second suitcase as well.  In a best-case scenario, this suitcase can be placed in the overhead compartment, never to be accessed again during the flight.

Which leads me to the time I broke my own rule. I was flying alone with both kids and I had put Amelia’s headphones in the second carry-on suitcase, which was already in the overhead compartment. The plane was ready to take off when I announced that I needed to quickly access my suitcase (no one asks questions when you’re alone with a kid and a baby).  I got the suitcase down, opened it just enough to get my hand inside it, reached around and yanked out the headphones.  Unfortunately, the force with which I yanked them out propelled a pair of my brightly-coloured, lace underwear out of my suitcase and into the air.  I watched in horror as the couple behind me scrambled to catch them before they landed at the feet of the couple behind them.  “Just leave it” was all I could think to say, but no one really wants to fly for four hours with someone else’s underwear at their feet, so they picked them up and handed them back to me while the rest of the plane watched. 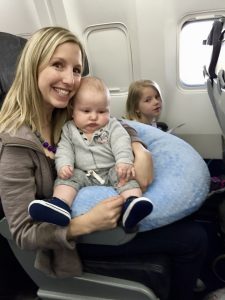 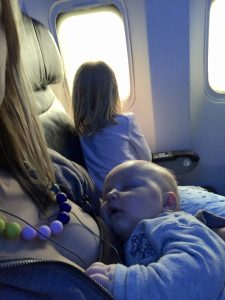 Back to the tips. As the Lottery Corporation would tell you, “Know your limit; stay within it.”  I’m talking about baggage.  In addition to the fees associated with baggage, there is the simple inconvenience of having a boatload of luggage while dragging children through an airport.  When you’re dealing with suitcases, strollers, car seats and children, it can be a logistical nightmare.  I usually try to limit checked luggage to one large suitcase for the family. Whenever possible, I borrow or rent a car seat at my destination, rather than lug mine with me. In many places, you can take public transit or a cab and avoid car seats entirely.

One way to make life easier is to take a stroller to the gate.  First, this eliminates the need to pay for it as checked luggage.  Second, it’s a built-in seat for your child and a great storage unit for at least one of your carry-on bags.  Once, when Ewan was a baby, I fit my nursing pillow in the stroller and no one dared question it as an additional carry-on item.  It really came in handy on the plane because I didn’t have to bear the weight of my heavy baby during the flight.  In fact, I was so comfortable that I fell asleep while Ewan was nursing. When I woke up, Ewan was snuggled into the nursing pillow and had pulled my nursing top down in such a way that I was completely exposed.  Given that I was sitting in the aisle (not my preference) at the back of the plane where people passed to use the washroom (also not my preference), I’m unclear how many strangers had to stare my nipples in the face. So I guess my advice here is, consider taking the nursing pillow but don’t flash strangers.

Finally, don’t be afraid to fly alone with your kids.  The kindness of strangers is never more abundant than when they see a parent alone with young children.  In many ways, the cumulative effort of many to make up for your missing spouse often equates to more help than any one spouse can offer.

Best of luck in your travels, wherever they may take you! 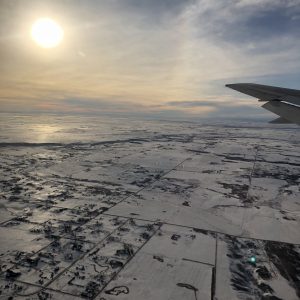